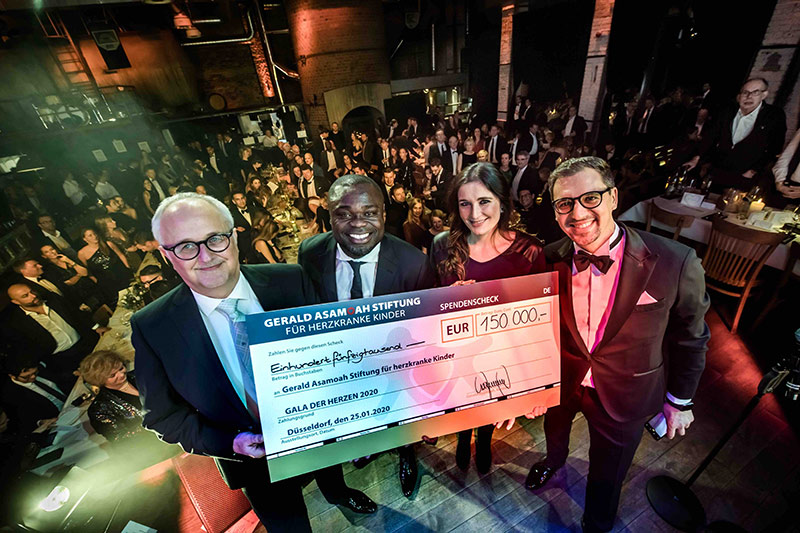 The fourth “Gala der Herzen” (Gala of Hearts) came to an end on January 25, 2020, at Dr. Thompson’s Seifenfabrik in Düsseldorf, with record proceeds totaling €150,000. All of the proceeds raised at the charity event organized by the Gerald Asamoah Foundation for Children with Heart Disease will be donated to charitable causes. As in previous years, Cross X Staff was again the main sponsor of the event.

This year the proceeds will go towards a joint project run by the Gerald Asamoah Foundation together with the kinderherzen association. “The money will be used to help carry out life-saving cardiac operations in a mobile operating theater in Ghana. We want to support the young patients there who would otherwise receive no help,” says Gerald Asamoah. “With the proceeds from this gala evening alone, we can save the lives of around 35 children in Ghana suffering from heart conditions. This is considerably more than the number of operations that could be carried out in Germany.” A heart operation in Ghana costs roughly €3,000 – €5,000, just a tenth of the cost in Germany.

The fundraiser was preceded by a glamorous evening with live music and an exquisite four-course meal, to which Gerald Asamoah invited various friends and prominent figures from the worlds of business, culture, entertainment and sports. The emcees for the evening were former MTV presenter Patrice Bouédibéla and Anne Menden, actress in the famous German soap opera Good Times, Bad Times. Some of those in attendance included ex-soccer player and Let’s Dance winner Hans Sarpei, Söhne Mannheims singer Rolf Stahlhofen, former No Angels singer Nadja Benaissa, rapper Eko Fresh, as well as celebrity chefs Nelson Müller and Anthony Sarpong. They were all actively involved in the fundraiser in support of their host.

Exclusive prizes for a good cause

In his opening speech, Asamoah, a former Bundesliga soccer player for Schalke and an international player, thanked his guests for coming and for their support, before getting right to the importance of the evening’s event: “Let’s never forget why we’re here, and let’s give back some of the good fortune we are lucky to experience.” And his words were clearly moving for those in attendance. Numerous tickets were sold for the chance to win the exclusive main prizes, which included a signed Schalke soccer uniform, a soccer camp at a Robinson Club with Gerald Asamoah himself, and a Mini. Martin Klempnow, best known as Dennis from Hürth, was the auctioneer driving up the prices of the prizes – including a meet and greet with German singer Sarah Connor, two tickets for the UEFA Champions League soccer finals in Istanbul, and a signed photo of German rock star Udo Lindenberg. By the end of the evening, proceeds had reached the highest ever recorded – €50,000 higher than the total in 2019.

Further information on the event can be find under:
www.gerald-asamoah-stiftung.de.