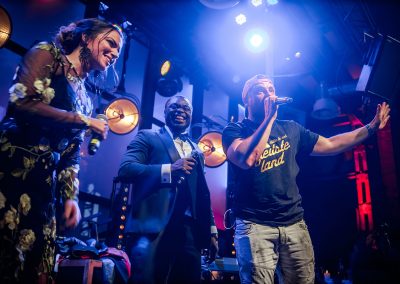 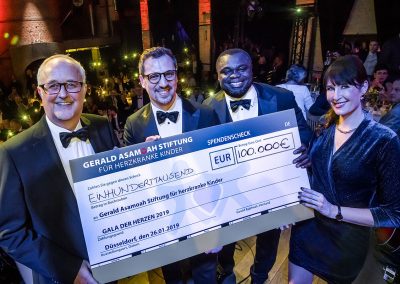 On January 26, 2019, the “Gala der Herzen” (Gala of the Hearts) event organized by the Gerald Asamoah Foundation for Children with Heart Disease took place in Düsseldorf for the third time already. As it had done the previous two years, Cross X Staff acted as the main sponsor of the event, the revenues from which will go exclusively to a charitable cause.

The foundation, which was founded by the former German national soccer team member Gerald Asamoah, made it its mission to support children and adolescents suffering from heart disease through its engagement and concrete aid projects. All the revenues from the charitable event will thus go to fund the life-saving operation of a child with heart disease, who is not able to receive any further help in their home country of Syria. The donations from the 2018 gala, for instance, were used to fund the heart operation of seven-month-old Petr from Russia, who has since recovered well from the operation and already returned to his home country.

As in previous years, the third “Gala der Herzen” event took place at the Seifenfabrik Dr. Thompson’s venue in Düsseldorf. During the opening speech, host Gerald Asamoah welcomed the some 250 guests from the sports, music, and media sectors and quickly homed in on the purpose of the event: “I look forward to spending a nice evening with you, to the laughter and the celebrating. But the most beautiful thing about this evening for me is that we shall once again jointly save the life of a child with heart disease.”

He was supported in this endeavor by many friends and prominent guests, including former members of the national soccer team Kevin Kuranyi and Hans Sarpei, celebrity chef Nelson Müller, GZSZ actress Anne Menden, and singer Eko Fresh. Together with the other guests, they not only enjoyed a diverse entertainment program, including performances by musicians Joel Brandenstein, Makeda, Who´s Amy, and Fresh Music Live as well as comic “Denis aus Hürth”, but also an Italian-inspired 4-course menu and an atmospheric after-show party with top DJs Phil Fuldner and N-SURE.

At the end of the evening, the total of the donations was announced to the delight of the foundation team and the attending guests. The donation check showed the overwhelming amount of €100,000, all of which will go towards helping children with heart disease and their families.

Further information on the event can be find under:
www.gerald-asamoah-stiftung.de.